Agriculture Showcase May 1 in Brooklyn 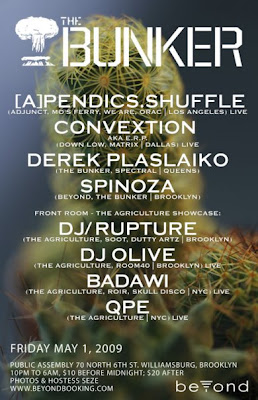 It's been a long while since we had all the fellas in one place...

Beyond Booking presents
THE BUNKER

Jace Clayton aka DJ /Rupture has been one of our favorite DJ's
for a very long time. He played a few impressive sets at
Spinoza's Undercity event at the old Halcyon space on Smith
Street around 2000-2002. In 2001, he put out the Gold Teeth Thief
mix, which caused a global stir and really put him on the map.
Since then, he's done several mixes for Tigerbeat6 and Violent
Turd. Although best known for his mixes, Jace is also a very
talented producer who has put out amazing albums for The
Agriculture and Tigerbeat. He is also one of the most interesting
music bloggers out there, and hosts an essential weekly radio
show on the greatest radio station in the world, WFMU. 2008 was a
big year for /Rupture. His "Uproot" mix CD on The Agriculture
garnered wide critical praise, making it into Pitchfork's top 10
albums of 2008 and Resident Advisor's top 5 compilations. Jace
hasn't played at set at The Bunker since he tore the roof off of
The Bunker 4 Year Anniversary Party at subTonic (one of the
final, and best parties we ever had down there).


Also joining us will be The Agriculture co-founder Gregor Asch
aka DJ Olive The Audio Janitor. We could go on and on and on
about his many accomplishments, but here's the short list:
founded WE and played a huge role in the Brooklyn underground art
party scene in the 90s, founded Phonomena Thursdays at subTonic
(the party that introduced us to that magical space) in 1999,
founded the Agriculture label with James Healy in 2003, showed
work at the Venice and Whitney Biennials, and recorded and toured
with a mind boggling list of notable experimental musicians.
Olive was one of the first people Spinoza met upon moving to NYC
12 years ago, and has remained a constant inspiration and good
friend ever since.


Raz Mesinai aka Badawi is another key member of The Agriculture
family. He first made a splash in the mid-90s as one half of the
seminal Sub Dub duo with John Ward. Their early releases are
still very much relevant and worth digging out (in fact, The
Agriculture re-released some of their best material earlier this
decade). His many albums as Badawi are some of the best
electronic dub and just plain otherworldly unclassifiable music
we've ever heard. He's gone on to play with many of the most
notorious downtown musicians, had his original music performed at
Carnegie Hall by Kronos Quartet, and has released albums on John
Zorn's Tzadik album. He has recently been embraced by the
dubstep community, and even released a remix on the latest Skull
Disco compilation. Tonight, he treats us to a rare live dub set
as Badawi.


Kacy Wiggins aka quiet personal electronics (qpe) is a subtly
profound composer whose reputation as a live performer and
soulful soother of the frenetic New Yorker has earned him a solid
following. His music takes off from instrumental hip-hop,
stealthily skirting the no-fly zones of excessive complexity and
over-production around much of IDM and trip hop, to land in a new
sonic terrain: Hip Hop NouveauLike the man behind the beats,
qpeís music reflects a quiet, understated, yet undeniably funky
style, one that brings out a diverse crowd, women and men of all
gentrifractions.


Kenneth James Gibson (best known as [a]pendics.shuffle) is a man
of many personas. Keeping up with him can be a time consuming,
yet rewarding venture into sound. As soon as you think you know
him and can grasp what's going on, he puts on yet another mask
and becomes something else. Always a surprise and never a let
down, he gives us what we want but donít expect. A rare stone in
todayís musical climate, Ken is rolling and collects no moss.
Over the years, [a]pendics has released music on a ton of labels,
including his own Adjunct, Dapayk's Mo's Ferry, Caro's Orac,
Agaric's We Are, Adultnapper's Ransom Note, Matt Tolfrey's
Leftroom, and Big Bully's Mineral. Ken has a ton of new
[a]pendics.shuffle productions that will see the light of day
soon, as well as the mighty impressive Bell Gardens debut album.
Bell Gardens is Ken's new project with Brian McBride of Stars of
the Lid. We've heard the demo, and think it's safe to say that
the album will blow minds and get a ton of attention when it gets
released.


Gerard Hanson (aka Convextion) hails from the unlikely
environments of Dallas, Texas. His productions have reflections
with the Basic Channel/Chain Reaction sound, and his inspirations
include Juan Atkins, Derrick May, Stefan Robbers, Red Planet and
Carl Craig. He released his first 12" in 1995. From 1995-1997, he
released 5 ep's, and then only 2 more in the next 6 years. Tracks
from his first releases were licensed to some big mix CD's and he
never got paid, which soured him on the msuic industry. After
that, other labels approached him but just wanted more of the
same and didn't really seem to understand his sound. After a
couple years of making music that nobody got to hear, the label
Down Low convinced him to start releasing his music again. His
current live set draws material from both his deep techno
Convextion alias, and his electro-edged E.R.P. (Event Related
Potential). Gerard remained willingly anonymous from the tieme
of his debut in 1995 until his debut European Live performance
in London in April 2006. While he occasionally comes out to play
amazing events like the Labyrinth festival in Japan and Bloc
Weekend in the UK, his live performances are still quite rare,
and we are honored that he has agreed to play for us at The
Bunker.


WARNING: Public Assembly has strict security at the door. No matter
how old you are or how often you come to the Bunker, please bring
government ID with you from now on to avoid conflict at the door.
You must be 21 or older to attend this event.
Posted by the Agriculture at 7:47 PM No comments:

Since his mixtape heard 'round the world, Gold Teeth Thief, dropped in 2001, Clayton (a.k.a. DJ /rupture) has become well-known for telling us what we should be listening to. For the past couple years, he's been knee-deep in cumbia and Latin beats. Here, he teaches us about cumbia and takes us to bootleg CD shops in San Francisco's Mission District to sort the wheat from the chaff—hardly an easy feat in the world of digital piracy.

Posted by the Agriculture at 11:13 AM No comments: