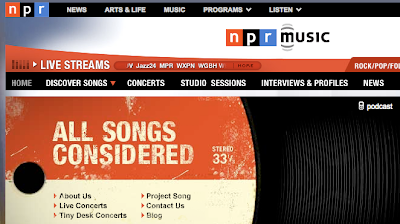 All Songs Considered on NPR.

Each summer, the Pitchfork Music Festival draws thousands of fans to Chicago to hear three day's worth of performances, by more than 40 bands. It's a mix of some of the best new and largely unknown, independent bands of the year. On this episode of All Songs Considered, host Bob Boilen talks with freelance reporter Jacob Ganz about some of the music Ganz discovered while covering this year's festival, which ended July 19. 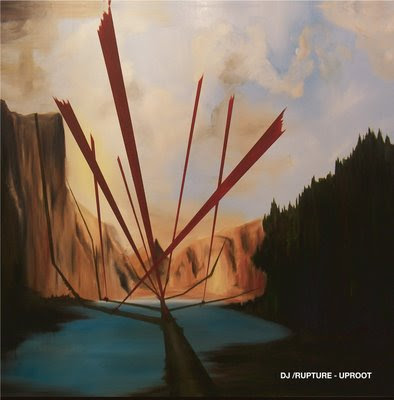 Posted by the Agriculture at 10:39 PM No comments:

DJ /Rupture Interview at the Pitchfork Festival on NPR 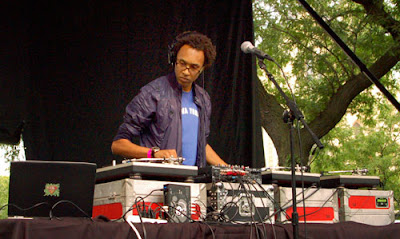 Last year, Pitchfork called Jace Clayton's newest mix under the name DJ /rupture one of the 10 best records of 2008. Uproot is a dark and throbbing mix of alien sounds; hardly the kind of thing you'd expect to hear at an outdoor dance party in front of thousands.

The Brooklyn-based DJ/blogger/journalist knows how to make unfamiliar sounds alluring, but Clayton told me he felt like the odd man out at the festival. We talked behind one of the festival's main stages after The Walkmen played and as M83 was warming up, and he told me he wasn't familiar with either group. After our interview, he bolted the festival grounds to track down some of Chicago's cumbia record shops.


Dancing to /Rupture at the Pitchfork Festival


You told me earlier that you've played a bunch of festivals abroad, but that this was your first in the U.S. Did you change anything from your usual festival set?

JC: I'm the only DJ at this festival. Three days of music, I'm the only solo DJ on a stage mixing records. That's never happened to me before. So that's the main difference. The lean here is toward "indie" guitar music and away from electronic or club music, which are the circles I usually play in. I have two types of sets. One is a more dancefloor-oriented, kinetic, "let's get bodies moving," "from the ear to the waist" type of thing. And then I also do experimental sets with a guitarist, Andy Moor from The Ex. That's improvised turntables and guitar. 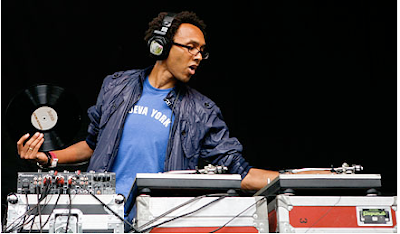 When you're putting together a set for the radio show, you know you've got a dedicated audience on the radio or web. Do you have to do anything different here to hold the audience's attention?

What I do on the radio has nothing to do with what I do on stage. When I DJ, I use a mixer with effects built in and three turntables, and I'm deeply immersed in the music. On the radio show, I play one song after the other. I talk between songs; it's more of a forum for sharing things I find interesting.

There is an element of that in your DJ sets, though.

But on the radio, I can play 10 minutes of very quiet electro-acoustic music from Tehran and get on and talk about it after. I can't do that on stage.

Wait, how exactly do you go about finding electro-acoustic music from Tehran?

[Laughs] Open ears. I'm very curious about a lot of music, and I spent a lot of time scouring CD and vinyl shops when I was growing up. That's happening less these days, but when I travel, I always try to go and see what's new. Electro-acoustic music from Tehran is easy. That's on Sub Rosa, a medium to small European experimental label. Finding music in 2009 is a real mix of going somewhere and talking to people face to face, and then of course the online stuff.

Tell me about a couple of songs in your set that you know will get a reaction -- something that will get people moving, or really shock them. 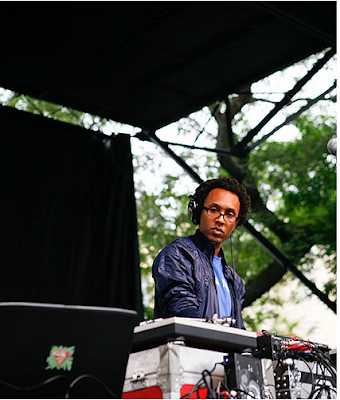 I like to mix shocking songs in, but I have a good feeling about what will get people moving. A DJ has to be quite sensitive to issues of context. I played a cumbia remix with an Ol' Dirty Bastard sample. You can dip into these moments of recognition with a sample or well-known song, but what I like to do when I DJ is take that energy when people have those moments and pull them into something totally unfamiliar. From my point of view, a lot of being a good DJ is that give-and-take relationship with the audience. You don't want to alienate them, but at the same time, it's quite boring if you're only playing Madonna remixes with a Baltimore break underneath. Which many DJs can tour the world doing, but to me, that's just stagnant and uninteresting. It's okay, but only if you're using that familiarity as an entrance to go deeper. The most exciting thing is, when you can, you get 5,000 people dancing to something they've never, ever heard before.

I heard some music from your most recent record, Uproot, during your set. It's a slow, moody record. Will your next record be similar?

This November, I'm putting out a follow-up that's maybe a little more rough around the edges. Uproot was my most emotionally and sonically focused record. And part of that was that it was 100 percent legally licensed. So I couldn't put in the mainstream stuff. But I certainly keep moving. If you had caught me DJing five years ago, I would have sounded radically different.

People can hear some of the mixes you made online, right?

I did a mixtape called Gold Teeth Thief in 2001 that had a lot more mainstream stuff. That's still online for free. I did another one called Minesweeper Suite that's noisy drum-and-bass. But genres rise and fall, so I try to go for a dynamic that's beyond that. I think my fans understand that I'm a moving target, and they like that. Today's set was a show to get people moving in a park. Uproot was a headphone record or a car record. A subwoofer record.

Tell me a little bit about making Uproot. Where did you find the music on it, and did you try to keep to a specific tone?

The reason I started doing Uproot was that I realized I had a lot of friends doing music with a lot of bass and a lot of space, taking on these ideas of club music in the late 2000s and pushing that. First, I asked a cellist/composer I work with named Jenny Jones to write a string quartet for this mix, so that was the seed of Uproot. And the record just grew around that. I'm lucky in that I know a lot of people who send me music. The new record continues in that direction. I mixed it with my musical partner, Matt Shadetek, so we reached out to a bunch of Brooklyn people like Gang Gang Dance and Telepathe and did remixes of their songs. We have a Brooklyn vocalist called Jahdan Blakkamoore and we produced two tracks with him. I tried to pull in friends of mine. Elizabeth Alexander, who read at Obama's inauguration; she's on there, as well. So it's almost a hybrid between a mix and a producer album. 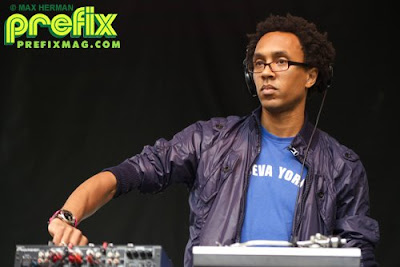 Have you seen anything here at the festival that made you excited?

Musically, I'm kind of an odd duck here, but the thing that's made me most excited is the lack of corporate sponsorship. That's really fantastic. If this were in Europe, there'd be beefy security with headsets on and this would be the X-beer company stage. That one would be the X-energy drink stage. And there would be a huge glowing soft-drink logo behind you while you DJ. Maybe not that bad, but the presence of big trans-national companies at festivals of this size. So to see this happening here in Chicago with nothing like that -- the local beer is sponsoring that -- translates to the atmosphere. It's just a day in the park.

There aren't even Pitchfork signs.

Yeah, that's kind of amazing. It's like the indie aesthetic writ large. This success story of a guy who started this in his basement which turned into a media juggernaut. But there's a DIY, you-can-do-it-too feeling. That's really encouraging.

Here the NPR piece.
Posted by the Agriculture at 9:08 AM No comments:

DJ /Rupture at the Pitchfork Festival 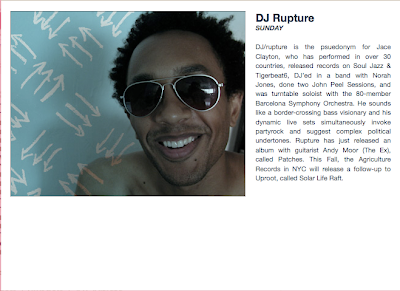