"Dub Step? Truth is music is made from only two things: Frequencies and choices. Once you see it that way genre has absolutely no power anymore and can be mutated into any shape imaginable"
- Raz Mesinai

Listen to the Release 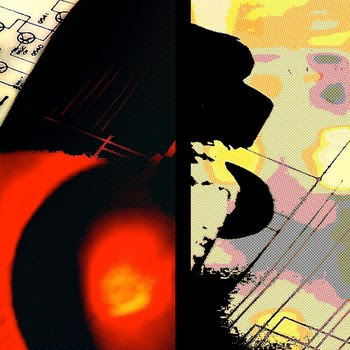 Composer, producer and sound alchemist Raz Mesinai makes music at the intersection of Dub and modern composition. As a solo artist and with his ensembles, he creates mythic performances evoking ancient rhythms with electronics, acoustic instruments and turntables. His recordings as Badawi have placed him on the forefront of the experimental electronic scene for over a decade, with remixes contributed by such artists as Kode 9, Shackleton, DJ Spooky and Headhunter, and Badawi remixes of Burning Spear, Arto Lindsay and Shackleton. He’s been a fixture of the downtown New York improvised music scene as well since the late nineties, collaborating with such luminaries as John Zorn, Mark Dresser, Elliott Sharp, DJ Olive and many others.

Mesinai's music has been performed at The Lincoln Center Festival, Zankel Hall, The Kitchen, the Next, Next Wave Festival (BAM), The Whitney Museum, ICA London, Saafelden Jazz Festival, Etnafest, Tonic, The Stone, The Winter Garden, and numerous underground clubs in New York and Europe, including Love, Soundlab, and the legendary Mars, Sound Factory, Limelight and Save the Robots. In recent years, his work has been commissioned and performed by The Kronos Quartet, Ethel, VIA, and cellist Maya Beiser. In 2002 his music received an honorary award in the Ars Electronica Digital Musics category. 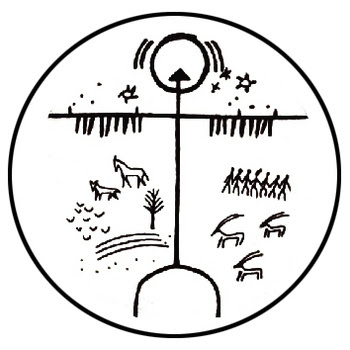 Mesinai is also an accomplished film composer. He was a Sundance Composers’ Lab fellow in 2004, and has scored feature films, documentaries, and short films, including Sorry Haters (official selection Toronto Film Festival), Romantico (offical selection Sundance Film Festival) and The Projectionist, for which he won the Herb Alpert Award for Excellence in Music for Film. His music has also been featured in films by Ridley Scott, Jonathan Demme and Darren Aronofsky.
Posted by the Agriculture at 9:19 AM No comments:

Deadbeat "Magnetic North" from the Agriculture on Vimeo.

"How does this sound? Deadbeat's Radio Rothko : Scion's Arrange and Process Basic Channel Tracks :: Richie Hawtin's Decks, EFX & 909 : Jeff Mills's Live at the Liquid Room, Tokyo. Easy enough, right? Yet it isn't, not least because the circumstances this one comes out into are so different.

The comparisons are between classic mix CDs and a later one with a similar template and aim. At a time when Soundcloud will absorb us all, there's something special about (weird to type this) the old-fashioned mix CD. So many mixes abound online, at so many different skill levels, that it's easier than ever to appreciate the kind of work that goes into licensing (even handshake deals take time), selecting and whittling down a fully legal mix CD. Going those extra steps tends to mean more thinking about it along the way, a refining process crucial to a mix of this scope.

What Deadbeat sets out is a kind of Whitman's Sampler of dub, techno and minimal's intertwining paths, heavy on the Basic Channel family, with dabs from debtors like Pendle Coven and 2562. The mix takes its sweet, patient time establishing itself, a radically minimalist gesture in any era; the build-up is sweetly agitating, and the way it blossoms in different directions is clearly pre-meditated, without seeming clinical." - Michaelangelo Matos 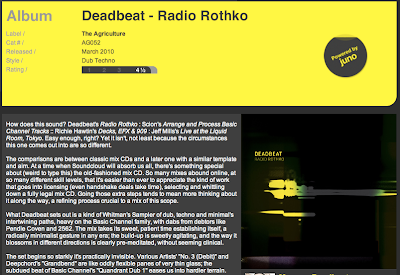 Posted by the Agriculture at 5:51 PM 6 comments: 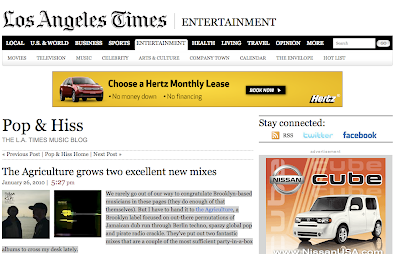 from the LA Times Music Blog...

We rarely go out of our way to congratulate Brooklyn-based musicians in these pages (they do enough of that themselves). But I have to hand it to the Agriculture, a Brooklyn label focused on out-there permutations of Jamaican dub run through Berlin techno, spazzy global pop and pirate radio crackle. They've put out two fantastic mixes that are a couple of the most sufficient party-in-a-box albums to cross my desk lately.

The first is "Solar Life Raft," a collaboration between DJ Rupture (who, not uncoincidentally, penned one of my favorite pieces of recent music writing) and Matt Shadetek. The record somehow finds space on the same shelf for mind-melt reggae from Jahdan Blakkamoore and Stagga's fractured dubstep as well as Luc Ferrari's noise sculpture and Gang Gang Dance's passport-stamp freakouts. Listening to "Solar Life Raft," you won't know whether to take pills and dance madly in a darkened room, write a dissertation on sonic-diaspora politics or strip to your skivvies and run through the spray from a broken fire hydrant.

"Radio Rothko," a collection of dubby techno compiled by the Canadian DJ Deadbeat, is by contrast about as pristine and focused a mix as electronica has seen lately. Rooted in the brittle, faded synth arpeggios and mechanized kick drums of the '90s Berlin duo Basic Channel, the mix ebbs along through Monolake's bleary subway-funk and 2562's creaky head-nods, while Basic Channel's phosphorescent throb binds it all together. The ever-articulate Philip Sherburne contributes some great liner notes, so I'll pass it off to him in saying it's "...a cold, reverberant thrum. The pulse of dub reggae running through Japanese-built machinery, filters frothing; the room tone suggestive of nothing so much as the untold empty structures in the recently-reunified city."

Here's the complete article.
Posted by the Agriculture at 9:55 AM 1 comment: 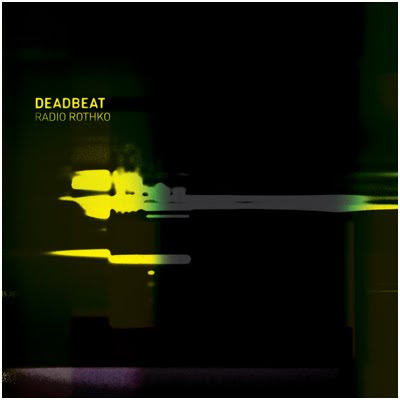 Comprising artists such as DeepChord, Monolake, Quantec and Pendle Coven, Radio Rothko presents a healthy mix of dub techno's classics and contemporaries, with a notable emphasis on the work of Basic Channel's Mark Ernestus and Moritz von Oswald. The mix takes advantage of the music's spacious and atmospheric nature, bubbling up into a more dance floor-friendly centre before showcasing the dubbier end of the dub techno spectrum. 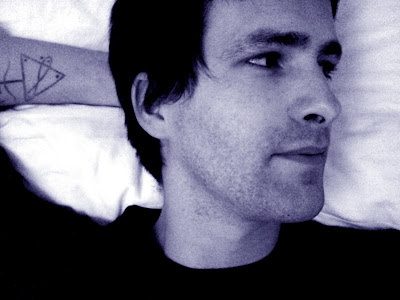 Radio Rothko will be Scott Monteith's first venture into the world of the commercial mix CD, and also marks his debut release for The Agriculture, the Brooklyn-based label that gave us dubby genre-benders like DJ Rupture's Uproot mix. He's also seen fit to include three of his own compositions, including new track "Port Of Rix" as well as a special edit of "As We Conquer" from his 2001 debut album Primordia.

Here's the rest of the Resident Advisor article.
Posted by the Agriculture at 8:41 AM 2 comments: